Ghostlight Records has announced musical theater virtuoso Joe Iconis’ new recording, a sprawling new 44-track album, simply titled Album, which will be released on Friday, June 17. The album features over 70 members of Iconis’ extensive family of collaborators, including Aaron Tveit, Andrew Rannells, Lin-Manuel Miranda, Krysta Rodriguez, Kerry Butler, Danny Burstein, Annie Golden, George Salazar, Will Roland, Andrew Barth Feldman and many others. The album was produced by Iconis, Ian Kagey and Charlie Rosen, produced by Randi Zuckerberg, with musical direction by Danielle Gimbal and chorus arrangements by Joel Waggoner. There will be an album release concert in Los Angeles at the Bourbon Room on Wednesday, June 22. Tickets are HERE. Iconis also shared the project’s first single, “Album,” a piano ballad about art and legacy. Listen to the single “Album” HERE. Pre-register or pre-order Album to ghostlightrecords.lnk.to/JoeIconisALBUMPR

“Album’ is the last song I wrote for the project, so it seems fitting that it serves as both the album opener and first single,” Iconis explains. “As often happens with my work, I decided to write something short and simple and it turned into a 7 minute epic spanning a century. Oops. The song is all piano and voice until ‘ at the very end. While the sparse arrangement is an outlier on a record that features horns, strings and choirs, the message of the art bringing people together is truly a theme of Album, and one that I’m so grateful we can share right now. Family is forever and I hope you will be part of ours.

Album rushes through a cocktail of musical genres as its gallery of misfit children, reckless adults and various assorted creatures sing their stories of love, hope, murder, resilience and connection. Vast in scope and intimate in subject matter, the songs are a showcase of Iconis’ singular ability to find dramatic moments in the seemingly mundane. Sweet acoustic love ballads sit alongside indie-rock stadium screams on an album that’s both deliciously nostalgic and explosively contemporary. Featuring never-before-seen songs as well as Iconis classics recorded for the first time, this is a raucous, erudite and epic record made for a world on fire.

“Over the past thirteen years, the gang and I have performed hundreds of concerts in New York City and beyond. These songs have existed in fan-filmed YouTube videos, live captures and… that’s it. Until now,” Iconis says. “It’s been a long time since I dreamed of following up our debut album with an album that felt incredibly huge and really captured the ‘we’re all in this together’ vibe of a show. live from Iconis and Family.

“When the pandemic hit, I became obsessed with creating artwork that connects as many human beings as possible. I wanted to connect the artists in the room with each other and then connect the art that we created for listeners. Out of necessity, 2021 saw a lot of people making music in home studios. With all due respect, I wanted to do the opposite. Something that felt alive and gargantuan, and something something that sounded like it could never have been recorded in a bedroom. To make an album like this in Normal Times? Ambitious. To make an album like this in Pandemic Times? Crazy.”

Joe Iconis is a musical theater writer and performer. He has been nominated for a Tony Award, four Drama Desk Awards, two Lucille Lortel Awards, two Outer Critics’ Circle Awards and has received an Ed Kleban Award, a Jonathan Larson Award and a Richard Rodgers Award. joe’s musical be cooler (with Joe Tracz) performed on Broadway and in London after premiering at the Two River Theatre. His cast albums have been streamed over 500 million times. Joe is also the author of love in hateand Broadway Bounty Hunter (with Lance Rubin and Jason SweetTooth Williams) and many more. His music appeared on Season 2 of NBC’s “Smash,” with his song “Broadway, Here I Come!” greeted by The New York Times as a new entry in The Great American Songbook. 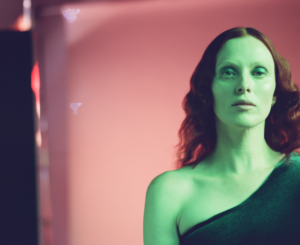 Famous English model and singer-songwriter Karen Elson makes her debut at Café Carlyle, June 7-11. For her very first residency at Café Carlyle, Elson will host an intimate evening, where she will look back on her long career with humor and songs. She has released two full albums, the acclaimed The Walking Ghost and double rosesand released in 2020 his first EP, Radio Rousse, Vol. 1. Last year saw the release of the first single from his new record, the electric “Lightning Strikes”, which was the featured track for the Moschino Resort 2022 campaign which Elson also starred in. Co-written and produced alongside the award-winning musical duo of Daniel Tashian and Ian Fitchuk, it’s a taste of what’s to come from Elson’s anticipated third album, GREEN, which is slated for release on April 29. This ushers in a new era for Elson as well as sound direction.

Elson has made a tour de force in the world of fashion and entertainment during her two-decade career. At eighteen, she took the fashion world by storm in a captivating Vogue Italy cover, photographed by Steven Meisel. She has walked for fashion houses such as Alexander McQueen, Chanel, Valentino and Gucci, starred in countless campaigns and can currently be considered the face of Moschino Resort 2022. Elson has graced over 100 magazine covers taken by the best photographers in the world. globe and is a leading advocate for models’ rights in the workplace. She is the author of the book The Red Flame, a coming-of-age story chronicling her professional and personal metamorphosis, which was published by Rizzoli Publishing in October 2020. 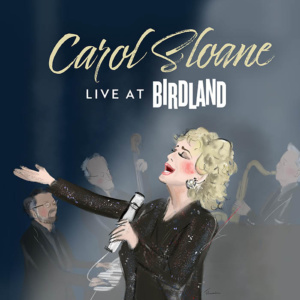 Club 44 Records is pleased to announce Carol Sloane’s new album, Living in Birdland, which is available on streaming platforms and on CD in stores and online . Release marks veteran singer’s 60th birthdayandanniversary as a recording artist and his first album in over a decade. Recorded at the legendary New York jazz club in September 2019, she was joined by an all-star trio, including the late Mike Renzi on piano, Jay Leonhart on bass and Scott Hamilton on saxophone. The album features liner notes by award-winning writer James Gavin and is produced by Joel Moss and Mark D. Sendroff. Stream, download or order the album at club44.lnk.to/LiveAtBirdland.

Sloane: a jazz singerthe feature documentary describing his remarkable career and the creation of this album, is currently in production.

For Living in Birdland, Sloane skillfully interprets the 13 songs of this collection with his refined taste and his elegant and discreet delivery. The track listing includes several well-known and recognized name standards, “The Very Thought of You” and “Two for the Road”, in addition to less heard but sophisticated selections such as Andy Razaf’s “Blue Turning Gray Over You” and Fats Waller. .” Other highlights include a pair of unheralded gems from the Oscar-winning songwriting team of Ralph Rainger and Leo Robin: the gently swinging opener “Havin’ Myself a Time” and the delicately poignant “If I Should Lose You.” . The album ends with a meditative version of a more recent composition: “I’ll Always Leave the Door a Little Open” by Richard Rodney Bennett, Franklin R. Underwood and Johnny Mandel, the Oscar-winning and Grammy-winning master songwriter died in 2020. 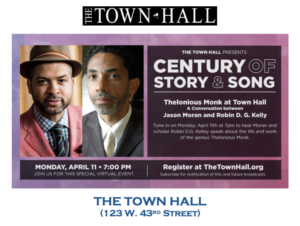 The Town Hall (www.thetownhall.org) is celebrating its first 100 years and is proud to announce a special virtual event in honor of Thelonious Monk. On Monday, April 11 at 7 p.m., MacArthur “Genius Grant” Scholar Jason Moran will speak with Robin DG Kelly, an American historian and Gary B. Nash Professor of American History at UCLA.

The two will talk about Monk’s life and work. This conference coincides with City Hall’s Centennial Series which will include a trio of concerts in tribute to legendary American composers Thelonious Monk, John Cage and Twinkie Clark. Through the Centennial Series, City Hall highlights important artists and movements whose work has cemented the place as a venue for artists and audiences alike.

As part of the May 6 series, Moran will present his multimedia project “In My Mind: Monk at Town Hall”, a program in honor of Thelonious Monk’s historic 1959 performance and subsequent release of The Thelonious Monk Orchestra at Town Hall – the Orchestra’s only surviving recording. Jason Moran said: “Thelonious Monk is a landmark in modern music. It is an honor to participate in the centennial of the town hall in tribute to the historical event of Monk. Monk’s music continues to provoke the stage with a staggering amount of love and humanity.

Tickets for the virtual conversation event are FREE and can be obtained by visiting www.thetownhall.org or calling 800-982-2787